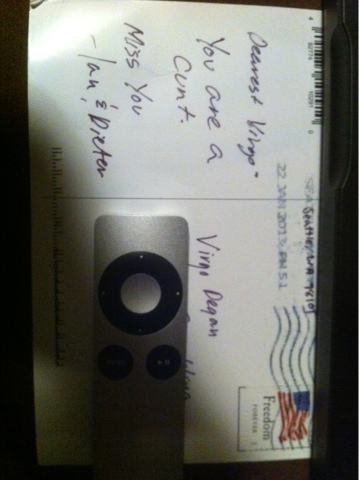 OK, so you guys know I used Grindr during the entire year of 2012 to get good/hysterical/ridiculous/shocking screenshots for your enjoyment. Well, I quit that Dec 31st so I could move on to other immature things. I deleted the account with Grindr’s in-app option, and emailed them asking them to please remove that account from the IMEI number of the device. After 10 days and 3 emails later, I still had not gotten any response from them. So, f*ck it, I was sure their system admin would do the appropriate things. So, I sold the device about a week ago. It went to a friend who was a brand new tester/virtual keyboard person (aka “Old”). Well, he was exited about different Apps and I installed a few for him, but sure enough, his super-gay *ss found out about f*ckin’ Grindr and had his friend download it for him and set it up. Well, Grindr never removed the account from the device and aaaaall these dudes started sending him messages thinking it was still me. (I can only imagine his excitement… I’m just sayin’.) So this one dude whom I had to block when it was my account, is now unblocked and sending my friend aaaaall these nasty naked nasty photos (which again, I can only imagine his excitement) and insisting “they” meet and f*ck. Now this is about the time I found out about it, because he told me he was going to meet up with some guy from the App. I’m ot gonna lie, the thought went through my head that it could be my old account. So, I met up with him last night and looked at his device. Totally still my account, but now just had his picture and info on it. There were messages from guys obviously thinking it was me, but my friend had no clue (old). So here’s the best part- my friend was SO upset that the guy he was going to meet (and most others he was talking to) probably thought they were still talking to me, that he said he wants to go back to his old non- smartphone phone. THEN he tells me that he hadn’t been able to much more than answer the phone, type a bunch of badly typo’d messages on Grindr and watch Netflix (which he described as a complete waste of time because the screen is so small) and read emails (typing emails on it was “torture”). So, in the interest of my sanity, I took the phone back this morning and had his sh*tty-*ss regular old phone put back on his account. Job well done, if you ask me.
Now, I’m going to try and get Grindr to disconnect the account from the phone so I can give it to another sTupiT person.
I hope you enjoyed the story. I am going to masturbate now. 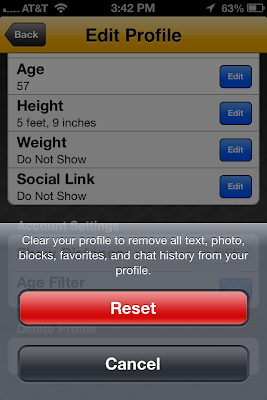 (my gay reputation was harmed in the taking of this screenshot)

So, I’m at a Jew Food place and I’m watching an episode of Army Wives on Netflix on the handy dandy iPhone, and as I’m watching the Doctor dude tell the nurse chick that he really likes her and it was so sweet and they kissed, he walks in to the place I’m eating at. It was one of those moments where I look at him, look down at my phone, and look at him again aaaaand once more at my phone.
I’m not gonna lie… I love him now and want to be an Army Wife.

I just got home from dinner and had to take a sh*t. Actually, I had to give a sh*t. Anyway, approached the toilet, dropped trou, lifted seat and Bam! This afternoons sh*t was still I there. That’s it. That’s the whole story. You’re Welcome.

I just sent this letter to Apple. I’m serious.

I have seen a lot of stuff come and go… new UI’s, new hardware, dropped hardware, etc. etc. and I’ve never felt compelled to actually write to Apple and b*tch about something. However, this new iTunes 11 is terrible. The UI is so confusing, I can’t upgrade my clients because it would be way too confusing for them. It’s also inconsistent. Playlists appear on the right when you want to drop a song in one? But if you select the Playlists tab, they appear on the left? I have to say out of all the things Apple has done (leather bound calendar and contacts!?) this is the worst. Why in the world did you change something that people were so used to and was extremely functional? This is something that even if people re-train themselves and actually get used to, is not nearly as seamless and functional. There are no real new features, so I’m baffled why you guys would do all this in a digital world of heavier and heavier competition.
Apple, I adore you, but no bien, no bien.

I am having my good ol’ diesel smog tested, which is kind of an oxymoron. Anyway, I purposely went to the place that had the most complaints and warnings by fellow Yelp users. I’m just curious what makes people so mean. Anyway, True. Story. This guy is as nasty as Yelpers said he was. Rude. And he kind of doesn’t know what he’s doing. He wants to tail-pipe test my vehicle (diesels are exempt) and he keeps looking around the engine bay like he’s looking for a lost cat. Then he said “What that?” (Not a typo, “what” and then “that”). I answered him by saying “That’s the fuel filter.” Then he asked “It original?” (again, not a typo) And I replied “Of course not. It gets replaced every 20,000 miles.” And then he accused me of “souping up” my baby oil burner because the filter is so shiny. (Um… Really?) Also, he charged me $45 instead of $29.99 even though I had a coupon. When trying to talk with him about it, he conveniently tries to pretend he doesn’t know English. It’s cute.
He is now asking me what I am typing and to please not post anything bad on the social websites. In a way, I feel bad for the guy… 🙁
Good news is, the f*ckin’ diesel passed, duh. Here’s to another 2 years of smog-fee driving.
Who wants Oral?

*Update: When I was leaving, the guy asked me to please post something nice on Yelp. Kinda’ funny. 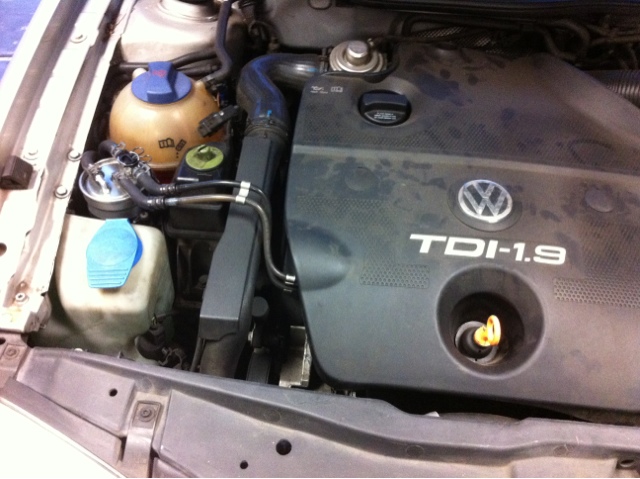 (my eyes were hurt in the taking of this photo. I mean, c’mon, clean off that engine cover!) 🙂